Do you know your Little Inner Monsters? These are the different feelings we deal with on a daily basis. Get to know them better and play with them in this card game. Play against the computer or a friend.

Available soon for PC and Mac on Steam

Do you know your Little Inner Monsters? 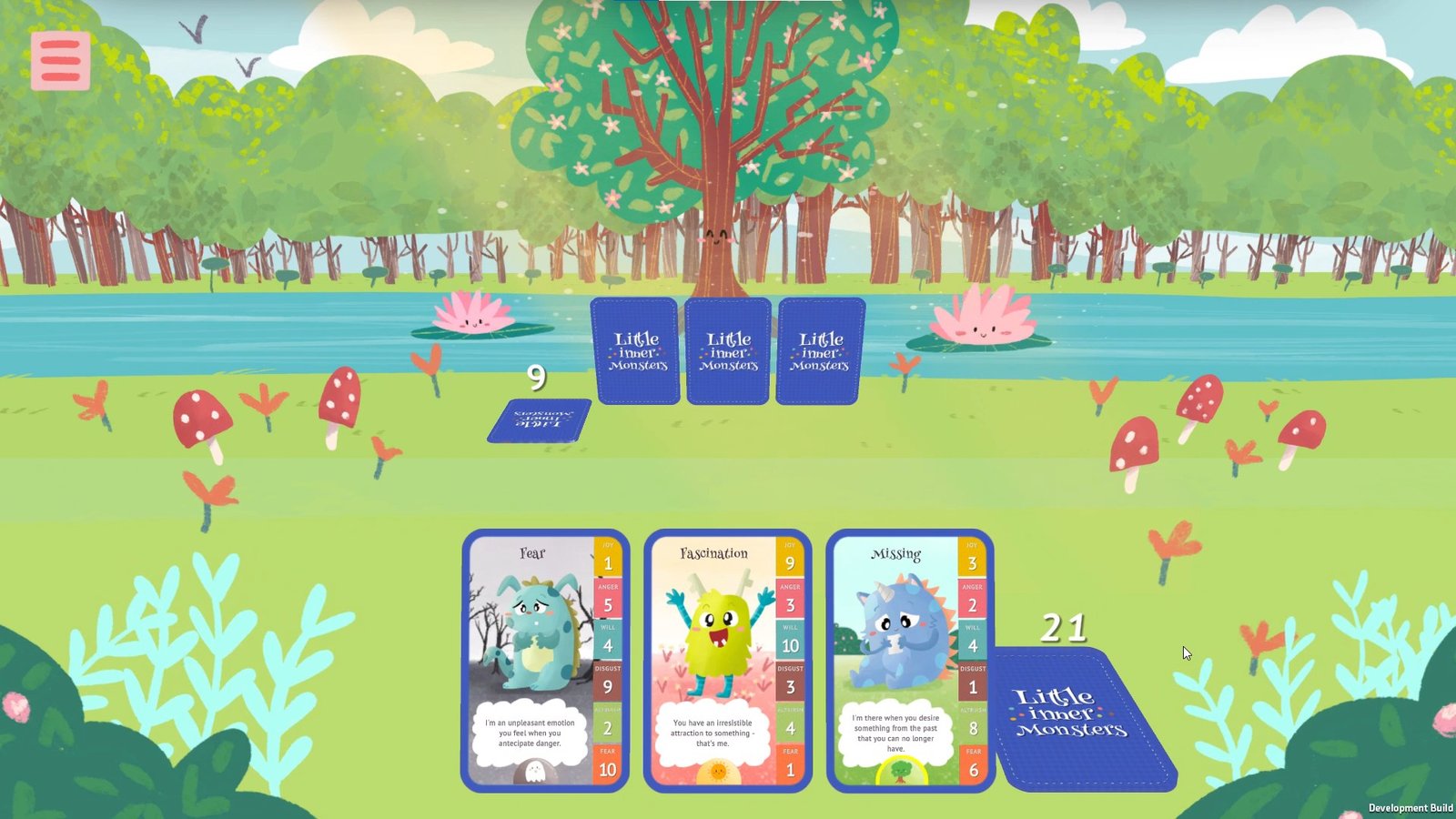 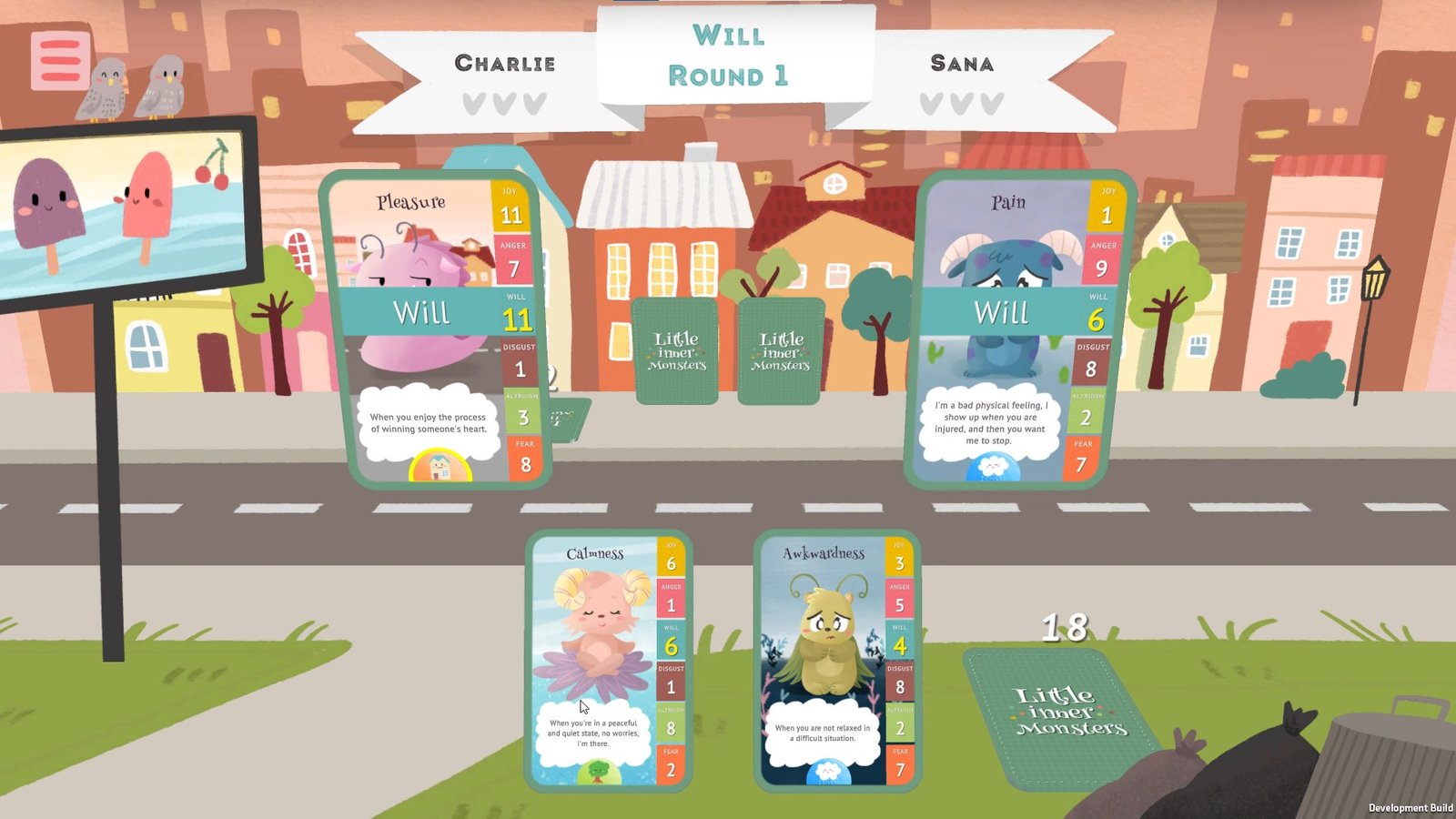 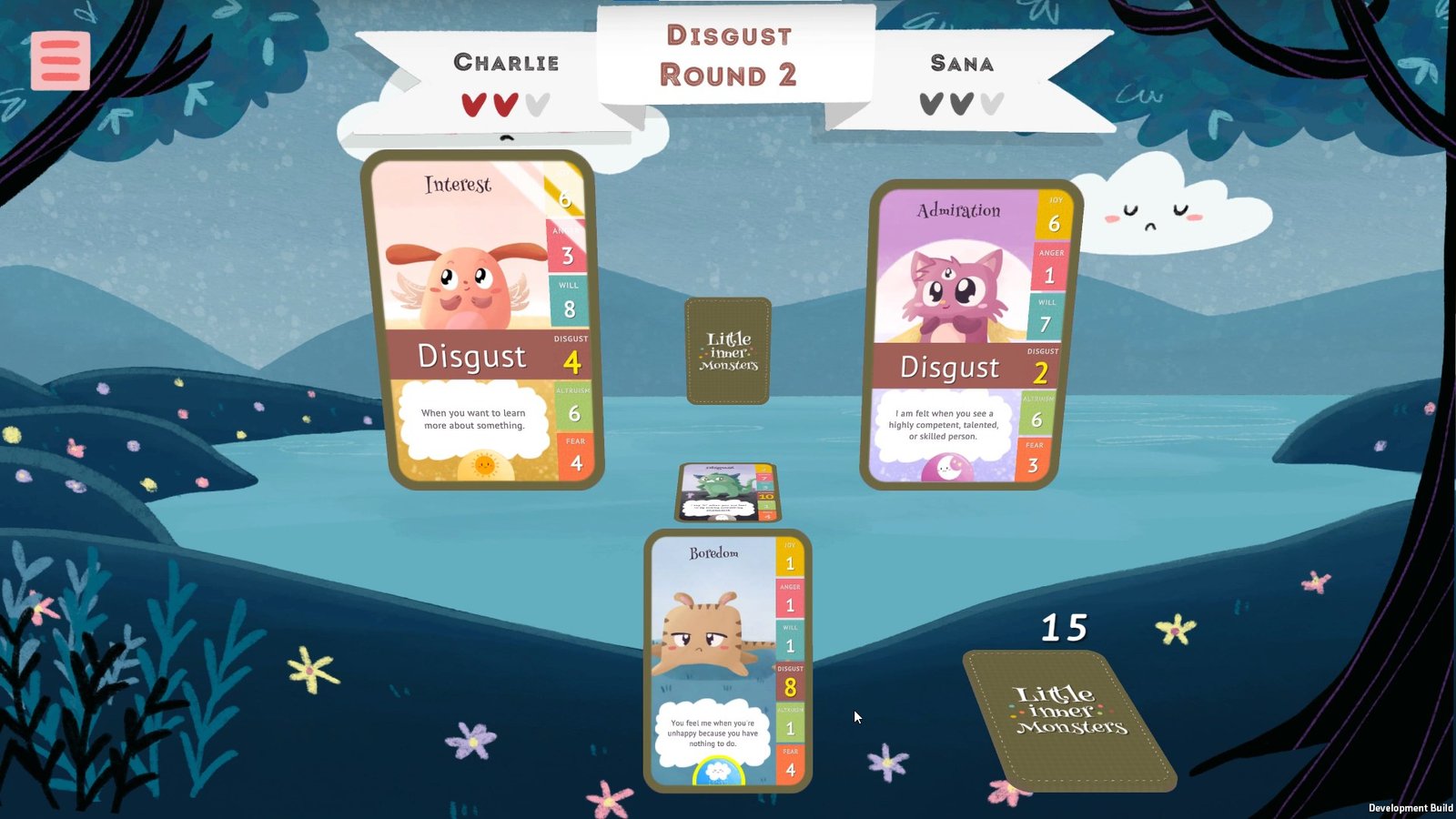 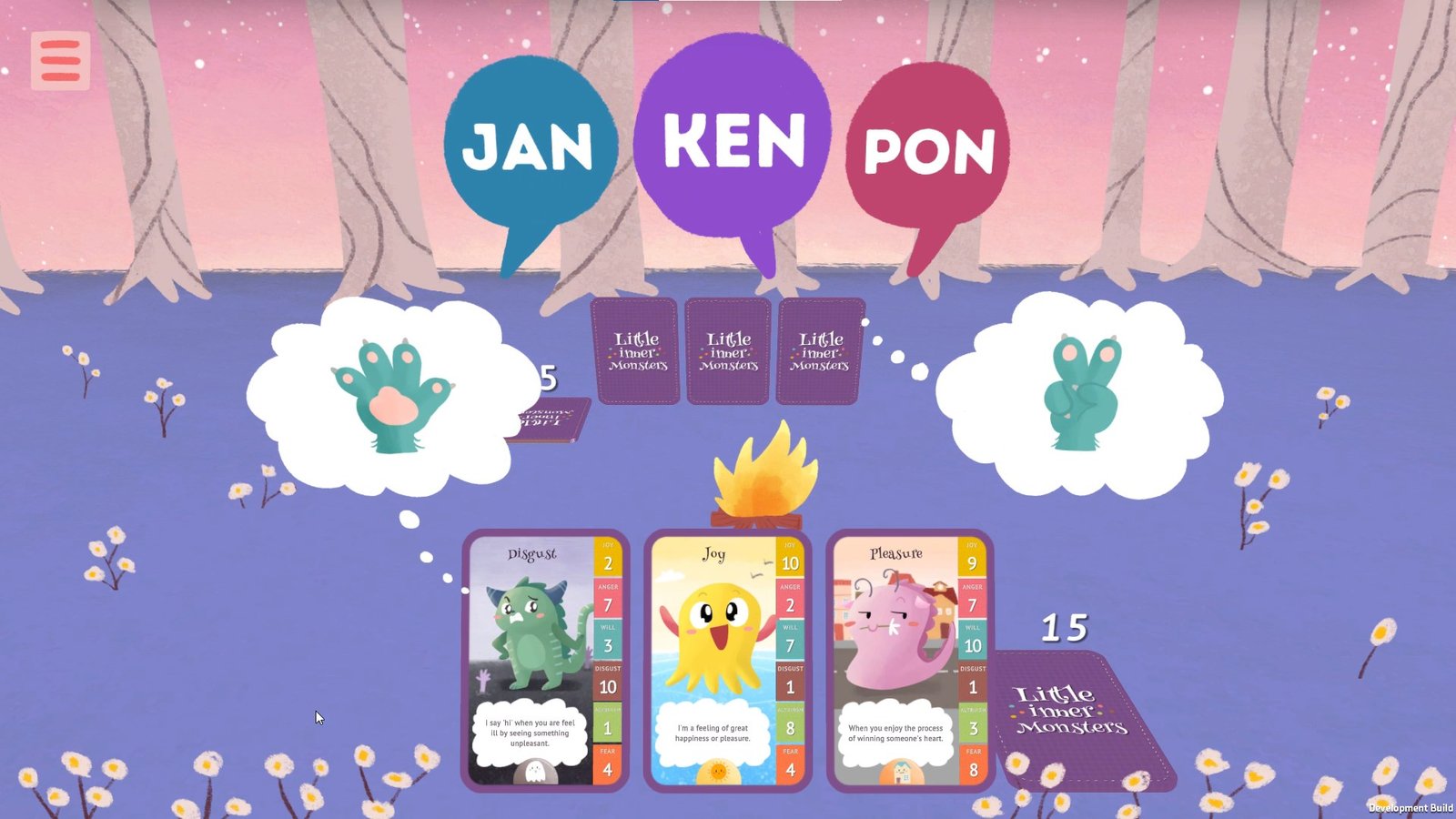 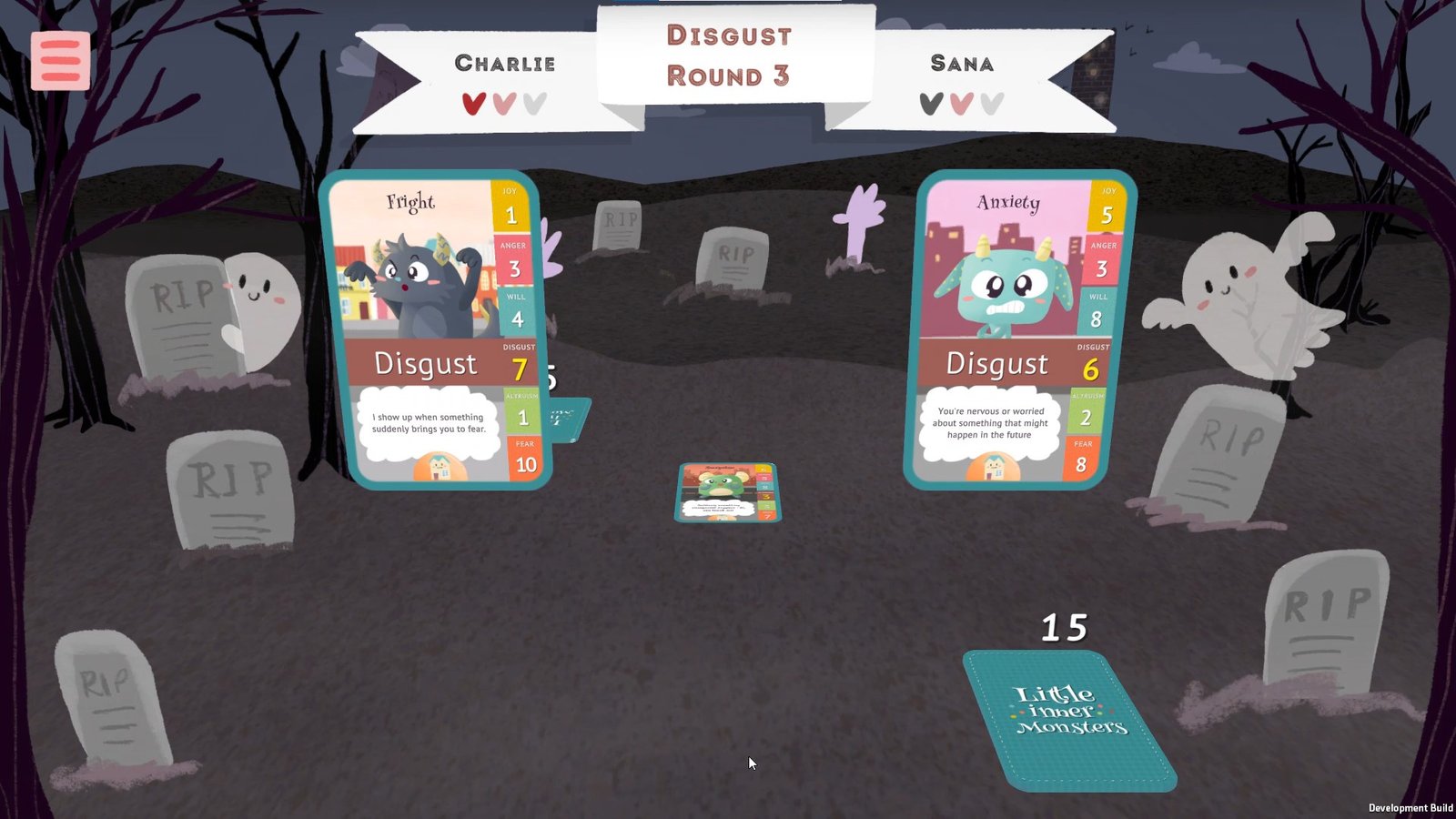 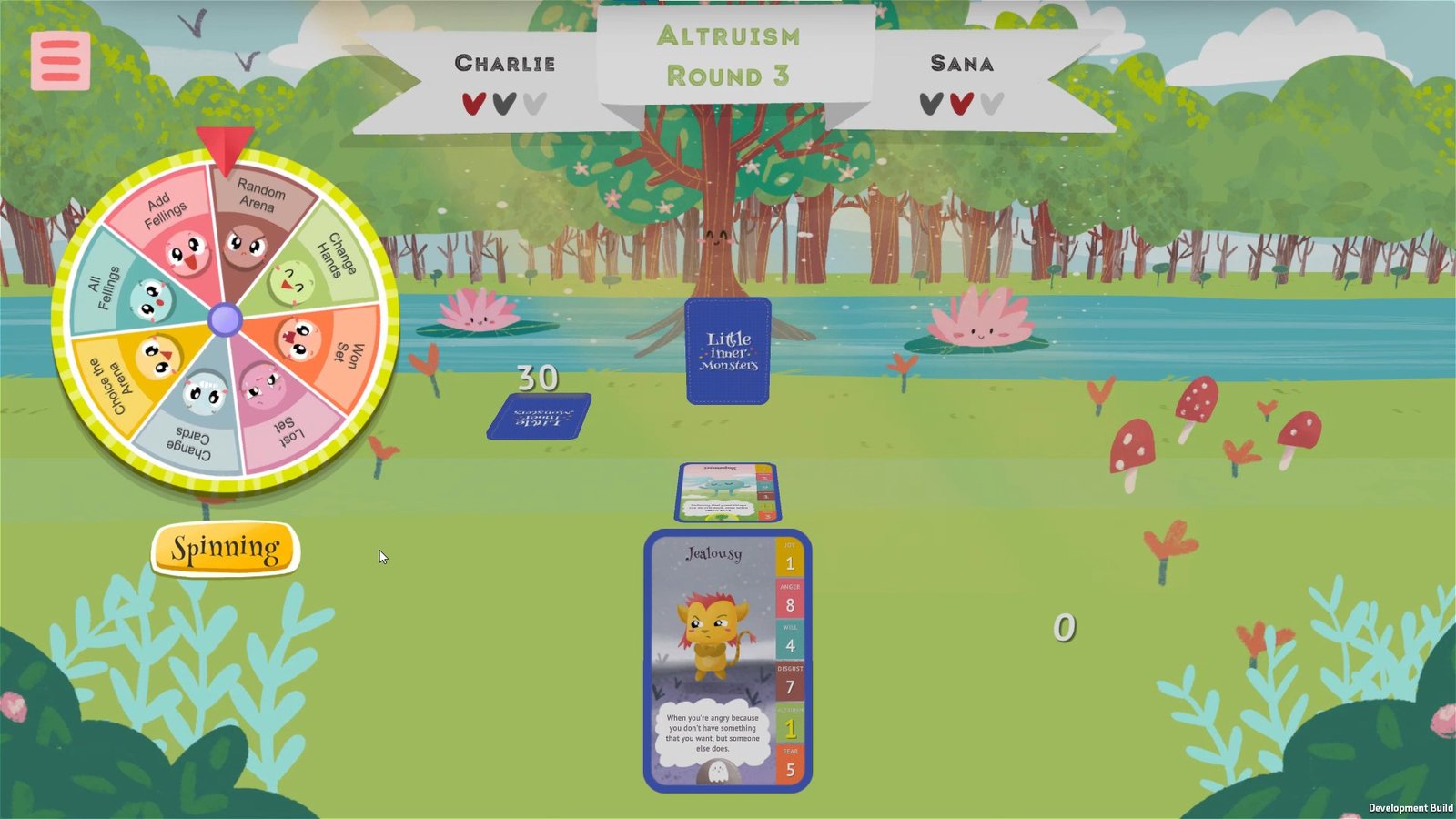 During an ordinary day, we go through different feelings, good and bad, that mix in different ways. They are like little inner monsters that we have to deal with.
Let’s play to get to know some of them better and populate your own grove.

A feeling doesn’t come alone. It can come mixed with several others, and it manifests itself more strongly depending on the situation.
So we chose a set of feelings to show this relationship.
We’ve created several little monsters to represent a variety of feelings (or emotions).

A feeling in a card

Each card represents a different little inner monster. There are 36 in total.
Each card has 6 auxiliary feelings – Joy, Anger, Will, Disgust, Altruism, Fear – with values representing their affinity with the main feeling.

The objective of a match is to accumulate all the cards for yourself until your opponent runs out of cards to play.
In each Set, a player will have 3 cards open.
In the Set, the cards battle one by one with an opponent’s card.
The battle consists of comparing the value of a certain auxiliary feeling between the 2 players’ cards.
Whoever has the highest value wins that Round.
Whoever wins the best-of-3 Rounds gets the 6 cards of the Set.

There are 6 Arenas in the game – they represent different environments we live in – Happy, Sad, Tumultuous, Calm, Dark and Heavenly. An environment moves our little monsters for better or worse. Each little monster has an environment that favors it, an arena in which it will grow stronger.
In your turn, choose the Arena that best fits your strategy.
Oh, each Arena has its own background music to get you in the mood…

Play Rock-Paper-Scissors (Jo-ken-po) to dispute who starts the match choosing the arena and the auxiliary feeling for the first Set.

Sana is your companion to dispute the single-player matches. Sana’s Artificial Intelligence is influenced by its mood during the match.
Think strategically to win the best-of-3 rounds!

If you’re in trouble, you can use the roulette wheel to change the course of the match with a lucky move!
Just hit the Panic button.
You have a limited number of roulette spins in a game.

Little Inner Monsters will feature different game modes that change the dynamics of the match.
You can play with decks of different amounts of cards
You can also play against a friend in the Multiplayer Mode.

Game for PC and Mac

To contact us, fill in the form below, or send a message to